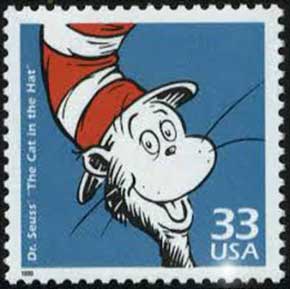 I’ve always been a pretty down-to-earth person, so I was surprised when I discovered that my fate had gotten tied up with the spirits of Wendell Willkie and Mary Cassatt.

Wendell and Mary came into my life through the US Postal Service. I send my short stories to lots of literary magazines. Of course, as part of the process, I have to include stamped, self-addressed manila envelopes for the gloomy probability of the story eventually coming back to me, accompanied by a rejection note.

Until early this year, many of my envelopes called for postage of 98[cts.]. The Postal Service has no 98[cts.] stamp, but it does have a 75[cts.] stamp (Willkie) and a 23[cts.] stamp (Cassatt). So, for many months, I had rushed home from work to find Wendell and Mary, from their immutable spot in the upper right-hand corner, overlooking yet another piece of bad news.

Then, one day while I was ripping a returned envelope to shreds, I stopped to study the two stamps. I began to wonder if there was a reason I was seeing so much of Wendell Willkie and Mary Cassatt. Was there a spiritual connection between them and me? Did they have something to say to me, something that could possibly justify my struggles?

I knew Willkie had run for president once, losing to Roosevelt. And I knew Cassatt was an artist. Clearly, these insignificant bits of information would not be enough to guide me in my quest for meaning. So I went to the library and checked out one book on Willkie and one on Cassatt.

I planned to just skim the books (after all, I had a lot of manila envelopes to send out). I started with Cassatt. She had been born in Pittsburgh to a family that had some money. Her talent was recognized at a fairly early age, and her paintings, which were generally well-received by the critics, sold pretty well. She liked cooking and growing roses, she hung around with Edgar Degas, and she was the only American ever really accepted in the Impressionist school of art. Although she went blind a few years before she died, it seemed to me she had lived a rewarding life.

Frankly, I was disappointed. I couldn’t see anything in Mary Cassatt’s life that struck a chord with me. So I turned to Wendell Willkie.

Willkie was the sort of person you tend to hate because he was wildly successful at everything he did. Big, handsome guy … excelled at college and law school … landed top jobs at corporations and law firms … became president of big utility company in New York … nominated by Republicans to run against Roosevelt in 1940 … after election, helped shape bipartisan, post-war foreign policy, but died in 1944.

I wasn’t getting anywhere with Wendell, either. I had gone through the biographies of both of my famous soulmates, but I just couldn’t find what it was I was supposed to get from them. Where was the connection between their lives and mine? They did what they liked from an early age and were highly successful. I am 37 and have long worked as a corporate-communicationshired geek. They had boundless energy. I, along with my wife, have two wild young sons; we have about as much energy as a muddy sock. They were permanent residents in the world of ideas. I am uncommonly familiar with the Mighty Morphin Power Rangers. They associated with artists, writers, captains of industry, heads of state. I am on a first-name basis with Phil the Cub Scout Master, who knows exactly why Cub Scouts hold up two fingers for silence.

Well, you can see my dilemma. If Wendell and Mary weren’t going to come through for me, I might have to conclude that my painful efforts to crack the publishing world were meaningless.

I decided to take one last flip through the two books. And I was rewarded. I found that Mary Cassatt had been a strong supporter of Alfred Dreyfus, the French officer wrongly accused of treason and shipped to Devil’s Island. The biographer said Cassatt had a “passionate indignation for the underdog.” This was it … I was on to something.

Buoyed by this discovery, I knew I had to give Wendell one last chance. Feverishly, I thumbed through the pages again. And there it was! He defended truck drivers and steel workers in their struggles against behemoth corporations! He stuck up for the civil rights of blacks in 1944 in North Carolina! How could I have missed all this? He even represented a despised American Communist in front of the Supreme Court–and he won!

I put aside the books and raced to my stack of rejections. Now I understood. All those Wendell Willkies and Mary Cassatts–they were looking at me benevolently. They, who had achieved greatness, were rooting for me, the nobody taking his best shot, fighting the odds, struggling against the oppressive bosses of the literary magazine world.

But my story didn’t end there. In January, of course, the Postal Service raised the rates again. Now my 98[cts.] envelopes cost $1.01 in postage. With some trepidation, I purchased my first 3[cts.] stamp: Would it fit in with Wendell and Mary in their cosmic quest to spur me on, or would it be, in political terms, a drag on the ticket?

My worries were groundless–the 3[cts.] stamp is a Conestoga wagon, which, according to the dictionary, was the type of covered wagon used by American pioneers for westward travel. I now had in my corner Scrappy Wendell Willkie, Indignation-for-the-Underdog Mary Cassatt–and half a continent full of intrepid, never-say-die pioneers blasting along on their hell-for-leather Conestoga wagons, tackling rugged, unknown, inhospitable country.

And now, when I see the hideous manila envelopes twisting evilly in my mailbox, I just sneer back. Do these bums think they can get rid of me that easily? The same me who has spirits in high places rooting for my success? And I’ll bet Wendell, Mary and all the pioneers of the Old West have plenty of high-powered friends in the postagestamp pantheon. Together, we will prevail. The force of history is on our side.